We proudly host the annual Anime-zing! anime convention in the Quad Cities every year. The convention brings together a half dozen guests and several hundred fans for a weekend of fun. Geeks who are looking for an Iowa Comic Con have found it in Anime-zing!, a paradise for fans of comics, anime, and nerdy culture.

Davenport, IA is a beautiful location situated right on the Mississippi River, with convenient access to attendees from Iowa, Illinois, Wisconsin, and Missouri. Many attendees drive to the convention from Chicago or Omaha to come have fun with their fellow anime fans in the celebration of anime and nerd culture.

Anime-zing! is your 3-day epic anime convention held annually in Iowa. Davenport's beautiful venue near the Mississippi river boasts tens of thousands of square feet of space for vendors, artists, and more to explore. We have numerous great panels and the convention is a good way to make fun friends. 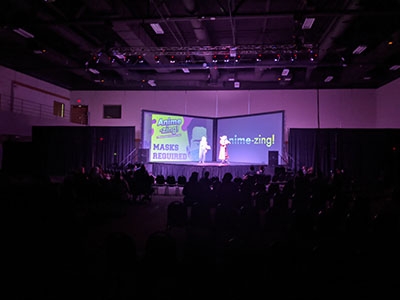 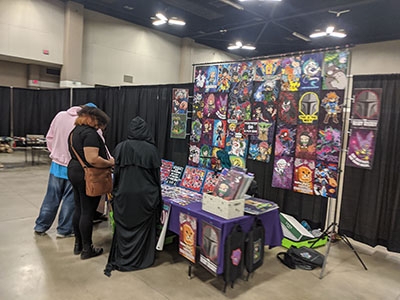 Three full days of anime, video games, and cosplay are enough to move any anime fan to action! Celebrate the joy of anime with hundreds of others who also like anime and nerdy stuff at this 3-day convention. Many attendees put on anime costumes to cosplay for the weekend.

How to enjoy an anime convention in Iowa?

In order to enjoy an awesome 3-day anime convention in Iowa you simply have to register for Anime-zing! and then attend the convention. Registering is how you attend a convention and is similar to buying tickets. Attending a convention is different because you have to provide your name and address when you are registering, because the convention tracks who attends and participates. In this manner the event is made more personal - similar to attending a professional business conference, the people coming are not just "ticketholders" but they are registered participants. They are "part of the event" and not just a passive observer.

The best way to have a great weekend enjoying anime in Iowa is to go to Anime-zing!, which has been going on for over ten years. The convention was first held in July of 2010 and has become an annual event ever since then.

What are the Quad Cities?

The Quad Cities is a name for the area consisting of several cities on the Iowa and Illinois border. These cities include Davenport, Bettendorf, Moline, East Moline, and Rock Island. Some people also consider smaller or nearby cities part of the Quad Cities metro area, including Milan, LeClaire, and even Muscatine. The "anime-zing" convention is held in the Quad Cities, usually in the largest city of Davenport at the city's largest convention center.

Where do I get Iowa anime convention Tickets?

If you want tickets for the Iowa held anime convention, you need to visit the website and go through a process called registration, where you provide your information and then select when you want to attend. Most anime conventions are three-days long. This means most people purchase a registration option that is valid for all three days. Those people then also book a hotel room at the convention center venue or a hotel within walking distance of the main exhibition area. People who get hotel rooms can then stay up all night partying with their new friends who like anime, cosplaying and taking photos together.

What should I pack for the con?

Packing for an anime con is unlike packing for any other kind of event; it's not like a business conference where you will be provided meals and pampered. You should pack key essentials including costumes, a toothbrush, deodorant, extra socks, granola bars, water bottles, etc so that you are prepared and ready for a long weekend. These events are long and exciting and can take a lot of energy, and often there are not scheduled break times for you to get lunch and dinner. This means that having easy and accessible snack foods and water on hand can be important.

The best item to pack is your cosplay costumes, which you can wear all weekend long. Some people pack a different cosplay for each day, while other people wear the same outfit all weekend. The choice is yours. Many people really focus on getting photos all weekend, and so anything you need for your costume, such as a needle and thread in case you break something, is important.

Health and hydration is also often overlooked at conventions because of how tightly packed the schedules are. Often there are five or six different activities to choose from all at the same time. You should also remember to pack deodorant because wearing a costume all day can be hot and make you sweaty.

What if I enjoy comic books and movies more than anime?

That's okay! Not everyone attending is a massive fan of anime. In fact, many people prefer video games instead of Japanese animation. Your mind is your only limitation when it comes to attending. You can wear a costume from a video game, or make an outfit based on a comic book character, and you will still fit right in at the convention. In fact some of the most popular characters are those from movies, like Deadpool or Iron Man. And there is a lot of crossover between genres. People think of Pokemon as an anime, but it was a video game first. And now it's even been part of a Hollywood movie!

What do I do at the convention?

The most important thing to do at a convention is: Have Fun!