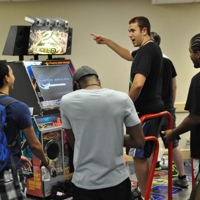 AnimeCon.org is proud to host two annual conventions in Minneapolis. We have AniMinneapolis for anime fans, and the new Minneapolis comic con Meta Con for fans of everything. These Minneapolis conventions are organized in part with the help of numerous local staff members. We thank local dealers also for their support and promotion, including The Source comic book shop, and Eagle Anime's anime store. Each convention brings together thousands of fans for a three-day celebration of geek culture.

Where are they held?

The Hyatt Regency Minneapolis plays host to our anime cons in Minnesota. This beautiful hotel boasts hundreds of hotel rooms, and some incredible, spacious meeting space.

AnimeCon.org conventions focus on fun experiences focused on fans. We want anime fans to be able to socialize with other fans and make new friends at all of our events. In addition, we invite some great guests from the anime industry, such as voice actors, directors, and musicians, which often change from year to year.

AniMinneapolis provides anime fans in Minnesota an epic and exciting place to make friends with fellow fans of anime. The convention has hundreds of different events during the weekend including almost 50+ panels, lots of video screenings, game tournaments, and more. Over the three days you can cosplay (optional), attend big events like concerts/dances/contests, play video games, and buy anime stuff. Because you'll be doing this among thousands of other anime fans, you're likely to meet a few cool people who like the same things and enjoy them together. Or, if you're a loner, we have some of the most epic event experiences you can imagine - exciting concerts, autograph sessions, hilarious panels and events, and much more.

Meta Con is another epic convention in Minneapolis that also has a great focus on anime, but sometimes mixes in other genres (hence the "meta") like comic books, video games, and pop culture. Meta Con happens annually just like Anime Minneapolis. The convention takes three days and has an incredible exhibit hall filled with merchants selling all kinds of anime and video game themed merchandise.